Voting in the United States: Home

Register to vote in the 2020 Presidential Election, learn where the candidates stand on important issues, and learn about the history of suffrage in the United States.

The right to vote has been a vital part of American democracy since our very founding- but it has also been restricted from specific members of the population. In 1789, during our first national elections, only 6% of the population could vote- those that were white and owned land.

Our national conversation on voting still continues to this day. The Voting Rights Act of 1965 helped to ensure equal and unfettered access to the polls through outlawing poll taxes, literacy tests, and more. This Act helped to ensure that voters had federal protection- however, in 2013 the Supreme Court struck down a key part of the Act, allowing states to change their voting laws without procedural protections in place. 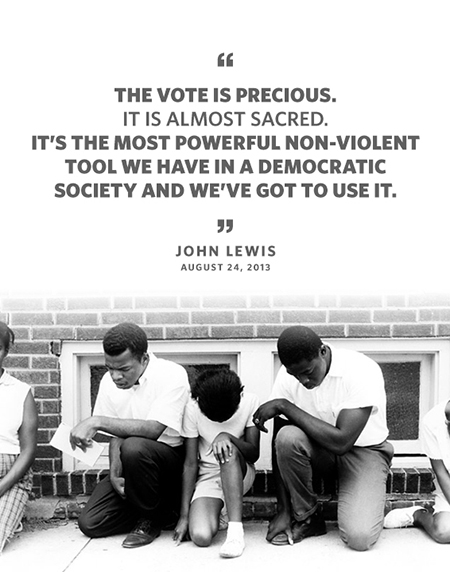 The right to vote is something that has been fought for- in fact, people have died to obtain it in this country. The violence that followed the peaceful march of Martin Luther King, Jr. and Representative John Lewis on the Edmund Pettus Bridge illustrates how important the vote is- and how much can be changed through exercising that right.

Political change is drivin by voting. Exercise your right to vote.  Register to vote in Rhode Island and Massachusetts online, locate your polling places, and vote on November 8th.