Consult these resources to understand the language of evidence-based practice and terms used in clinical research.

Systematic Review: A systematic review  tries to identify, appraise, select and synthesize all RCTs (randomized control trials) relevant to a specific clinical question.  Stringent guidelines are set in order to draw a conclusion about whether or not there is conclusive evidence about a specfic treatment or topic.

Randomized Control Trial: A RCT is a clinical trial in which the subjects are randomly distributed into groups which are either subjected to the experimental procedure (such as use of a drug) or which serve as controls.  It is the research design considered to provide the most reliable evidence for evaluating the effectiveness of an intervention.

Cohort Study: A study designed to determine the relationship between a condition and a characteristic shared by some members of a group. The population selected is healthy at the beginning of the study. Some of the members of the group share a particular characteristic, such as cigarette smoking. The researcher follows the population group over a period of time, noting the rate at which a condition, such as lung cancer, occurs in the smokers and in the nonsmokers.

Case Control Study: A study where previously existing incidents of a medical condition are used in lieu of gathering new information. A group of patients with a particular disease or disorder, such as myocardial infarction, is compared with a control group of persons who have not had that medical problem. The two groups, matched for age, sex, and other personal data, are examined to determine which possible factor (e.g., cigarette smoking, coffee drinking) may account for the increased disease incidence in the case group.

This Evidence Hierarchy Pyramid is often used to graphically represent the quality of medical research. The higher on the pyramid the more comprehensive in scope, and more rigorous the methodology and peer review. You should be looking for the highest level of research available in EBP. 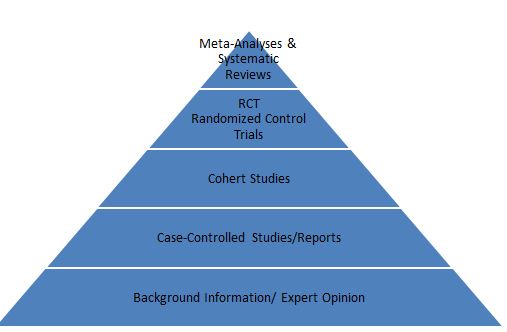 This guide will help you locate the highest levels of evidence: systematic reviews & meta-analyses, and practice guidelines.

Levels of evidence (sometimes called heirarchy of evidence) are assigned to studies based on the methodological quality of their design, validity, and applicability to patient care. These decisions gives the "grade (or strength) of recommendation".

The systematic review or meta-analysis of randomized controlled trials (RCTs) and evidence-based practice guidelines are considered to be the strongest level of evidence on which to guide practice decisions. (Melnyk, 2004) The weakest level of evidence is the opinion from authorities and/or reports of expert committees.