What is A Midsummer Night's Dream? & What is Oedipus? 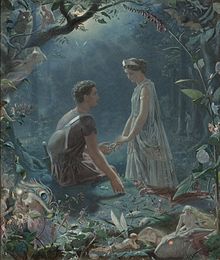 According to the Shakespeare for Students: Critical Interpretations of Shakespeare's Plays and Poetry,  a Midsummers Night's Dream is one of William Shakespeare's earliest romantic comedies, and it has been considered one of his most successful and best-loved works throughout the centuries. It has spawned some of his most memorable and imitated characters, such as Puck, the fairy sprite with a penchant for mischief; and Bottom, a weaver who becomes such a ham when rehearsing with the local theater group that a magical spell is cast to give him the head of a donkey. Ever since the play was written in approximately 1595, there have been versions for the stage that have adapted Shakespeare's multiple plot lines, emphasizing one or another character or putting a minor theme out in front of the play. Shakespeare combined elements of stories that were well-known in his time, drawing from Roman poets and folk tales; it is a sign of his skill as a writer that echoes of this play can be heard in works throughout modern culture.

(Hermia and Lysander by John Simmons licensed under CC BY 2.0)

Read More About Shakespeare's A Midsummers Night's Dream in the Gale Virtual Reference Library database at the Boston Public Library.

Sophocles’s Oedipus Rex is probably the most famous tragedy ever written. It is known by a variety of title (the most common being Oedipus Rex), including Oedipus the King and Oedipus Tyrannus. Sophocles, first produced the play in Athens around 430 B.C. at the Great Dionysia, a religious and cultural festival held in honor of the god Dionysus, where it won second prize.  Aristotle praises the play in his Poetics for having an exemplary, well-constructed plot, one which is capable of inspiring fear and pity not only in its audience but especially in those who have merely heard of the story. Following Aristotle’s appraisal, many prominent authors including Voltaire, Frederich Nietzsche, and Sidmund Freud reacted at length to the play’s themes of incest and patricide. In the twentieth century, the most influential of these thinkers, Freud, showed that Oedipus’s fate is that of every man; the “Oedipus Complex” is the definitive parent-child relationship. Throughout history, writers have drawn upon the myth of Oedipus.

If you need research help, using the chat box is a fast and easy way to reach out to us!