Welcome to the Research Guide for HST252, African American History.  Please use this guide to find resources for your Research Paper.  Please contact myself or any BCC Librarian if you have any questions.

Who was A. Philip Randolph?

"All oppressed people must assume the responsibility and take the initiative to free themselves." - A. Philip Randolph 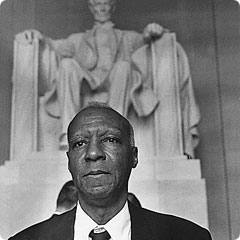 Notable Black American Men notes that A. Philip Randolph is one of the most important black labor leaders of his era. Early in life he became a socialist, and as part of his efforts to further the cause, he edited the Messenger from 1918 to 1927. Randolph then turned his efforts to leading the Brotherhood of Sleeping Car Porters to recognition as a bargaining agent, in a 12–year struggle. Using the power and reputation he had acquired in the struggle, Randolph called for a March on Washington in the summer of 1942 to protest government indifference to black rights in the war effort. The prospect of this protest resulted in a major advancement for the civil and economic rights for blacks.